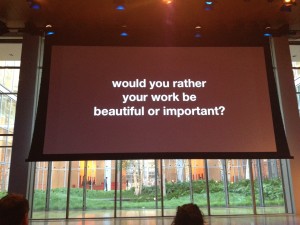 On November 8 & 9 I attended the Visualized conference at the Times Center in NY. I initially thought it would be complementary to the Data Gotham conference I went to in September. Though there was an overlap in audience and goals, the overall philosophy and execution were a lesson in left-brain/right-brain opposites. The gorgeous venue, fancy food, lax time schedule and attention to presentation detail were more of what one would expect from the “artist” type, while the corresponding elements at DataGotham were more what you’d expect from the “number cruncher” type.

“Would you rather your work be beautiful or important?” is a polarizing question. Some some lean toward beauty and others toward gravity, but as usual I find myself in the middle of the gray area of “both and neither.” I see it as my calling to bridge the gap between these two world views. I don’t claim in any way to be alone in this endeavor, though occasionally it feels that way to me.

The line-up at Visualized was stellar, and I saw a number of presentations that blew me away. In this post I’m going to focus on the work of Santiago Ortiz (@moebio), who probably won the prize for most creative visualization. Next post I’ll look at some important visualization work that journalists are doing.

Santiago is a visualization inventor and developer based in Buenos Aires. He’s put together a visual interface of his personal database of links, images, videos, articles and more. The database itself is not notable in technology (he’s used Delicious to store his stuff over the years), but it certainly is notable in scope–10 years worth of research through wide-ranging disciplines. Here’s where the magic comes in: he built an easy and intuitive graphical interface that allows quick browsing through the intersections of his

Venn Diagram of seven major areas of knowledge (art, networks, humanism, technology, language, science, and interface). You move the pointer over the blobby shape and you can quickly see how much information he has stored in that area.

It defies my powers of verbal description, so look at these two images. In the top one I’ve selected a datapoint called “Treemaps for space-constrained visualization of hierarchies”(whatever that is!). It lives at the intersection of art, networks, humanism and technology (dubbed “artintertechhumanet” in the bottom right). All the other dots are datapoints that fall into at least one of those categories. The column of icons on the left is a series of filters that can be toggled on and off. Want to only see video? Done.

In the second shot I’m using only the “institution” filter, and I see that the “Bestiario”lies at the intersection of science, interface, and art (“artintersci”). If I click on the Bestiario point, I’ll be taken to that bit of info.

The possibilities for a visual interface like this are mind-boggling, and they can live firmly at the intersection of beauty and importance. You can play with the actual interface yourself here (it doesn’t run well on my elderly Mac but works just fine on my fast new Windows machine).